They were about to break their Ramadan fast. But first, they fed others. Muslims feed the homeless in downtown D.C. The meal was prepared as they prepared to break their fast during Ramadan. (Photo by Christian K. Lee/The Washington Post)

As the sun set over downtown D.C. Wednesday during Ramadan’s final week, members of a nearby mosque gathered around trays of chicken and rice, ready to break their daylong fast. But though their tummies were rumbling, they decided to feed the homeless first.

“Any barriers between us and  you, we can remove them!” Ieasha Prime, wearing a multicolored hijab, preached as a few dozen people lined up to fill containers with food.

Prime, who worships at Dar Al-Hijrah Islamic Center in Falls Church, in Northern Virginia, was one of a group of Muslims reaching out to the community at this public iftar, the meal eaten by Muslims at the close of each day during Ramadan.

During a week in which suicide bombers possibly linked to the Islamic State attacked an airport in Istanbul, in the same month a man inspired by ISIS killed 49 people at a gay club in Orlando, outreach was important.

“The masses are being blamed for the behavior of the few,” Prime said. “… It’s important that we just not fast in our community.”

[The world’s most famous Muslim has left us, just when we needed him most]

The iftar, held not far from D.C.’s largest homeless shelter, also came the same day the city’s Office of Human Rights organized an event dubbed #FastWithDCMuslims. As the Web site explained: “The Muslim community is frequently targeted for discrimination, and we want to show our Muslim neighbors that D.C. is united against such discrimination.”

“The Muslim community indicated it felt left out of anti-discrimination work,” Mónica Palacio, the human rights office’s director, said at the iftar, sporting a pin that said “Catholic and Fasting — Ask Me Why.” “Invisibility is a key issue, and this is a great response.” 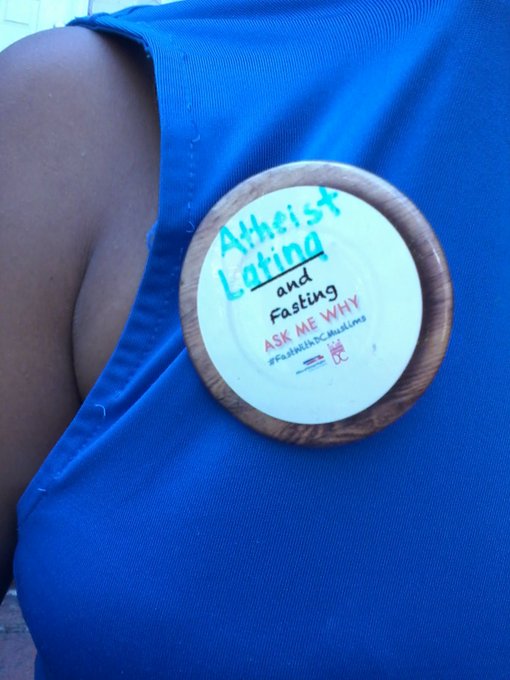 Rahim Jenkins, a human rights commissioner who co-sponsored the iftar, said he had attended similar events with every D.C. mayor since Anthony Williams’s tenure. But making sure others’ bellies are full before breaking a fast isn’t just good PR, he said. Ramadan teaches that there are blessings in feeding people. Imam Johari Abdul-Malik at the iftar: “You have to stay hungry for the love of God.” (Photo by Christian K. Lee/The Washington Post)

Rallying those in line for food with cries of “Welcome!” Imam Johari Abdul Malik of Dar Al-Hijrah, another co-sponsor of the iftar, said going without during Ramadan, as so many do each day, was a lesson for the body as well as the mind. After a few days of fasting each year, he said, he didn’t even feel hungry.

There was also at least one Muslim in line to be served. Abdul Kareem Adebayo, sitting by the entrance to the Judiciary Square Metro next to his food, is visiting the United States from Nigeria. Though he sometimes stays with a friend in Suitland, he said that he is homeless. He was contemplating breaking his fast at a nearby McDonald’s until he heard about the iftar.

Adebayo said people in the United States aren’t as familiar with Islam as they are in his homeland. But the food was fine, and so was the vibe.