Feeling G.O.P. Peril, Muslims Try to Get Out Vote 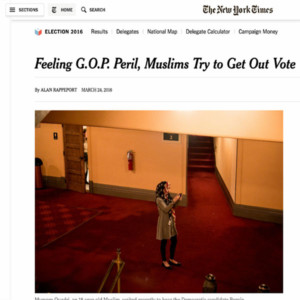 WASHINGTON — American Muslims are watching in growing horror as Donald J. Trump and Senator Ted Cruz battle for the Republican presidential nomination, outdoing each other with provocative proposals that have included Muslim registries, immigration bans and fleets of police patrolling their neighborhoods.

With round tables, summit meetings and news releases falling on deaf ears, national advocacy groups are planning to fend off policies they consider hostile to Muslims with a more proactive strategy: driving up the Muslim vote.

Organizations like the Council on American-Islamic Relations, known as CAIR, the Islamic Circle of North America and the U.S. Council of Muslim Organizations are encouraging mosques to turn themselves into voter registration centers before the November election so that Muslims can make their voices heard at the polls. Registration drives are expected to ramp up significantly in June, during Ramadan, when attendance at Islamic centers peaks.