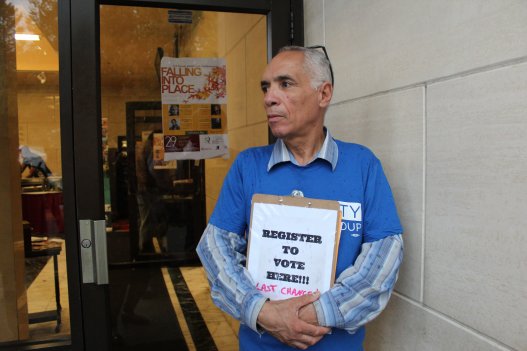 Carmel Delshad/WAMU
Othman Kefi registers voters at the Dar Al-Hijra mosque in Falls Church on the last day for Virginia residents to register. Kefi says Donald Trump’s comments about Muslims has spurred many people to register to vote.

“Are you going to get deported?”

Mahmoud’s son is 10 years old. She says he’s seen kids of other minorities get teased at school, leaving him wondering about his family’s place in America, especially after Donald Trump’s comments about Muslims. It’s put Mahmoud, who is a U.S. citizen, in a spot she didn’t think she’d be in for a while. 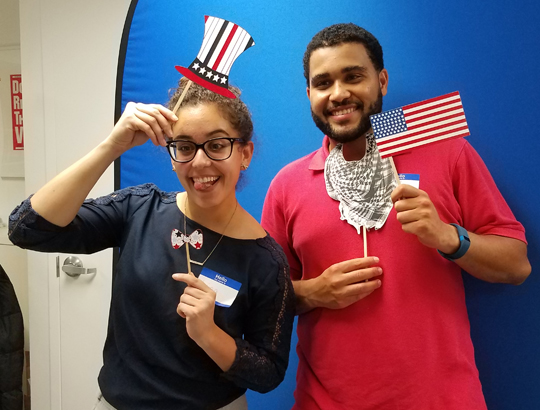 “I thought I was going to have this talk with him when he turned, like, 18,” Mahmoud says. “Definitely not this early.”

Muslims across the U.S. have been under increased scrutiny during this year’s presidential election. Donald Trump has previously called for a travel ban on Muslims entering the United States, and now says he wants to impose “extreme vetting.” While there was a loud outcry from Muslims in America against his proposals, it’s still not clear if that’s enough to spur them to vote in large numbers. But civic engagement groups like the Arab American Institute are hoping to channel that outrage into an organized effort to get out the vote.

“I think it’s a natural response,” says Maya Berry, executive director of the Arab American Institute. “If you feel like someone’s sort of got your back up against a wall or you’re being pushed in a certain way, then the instinct is to kind of reject that, and to say I’m going to do better than that.”

The institute is a secular organization in D.C. that works to engage Arab-Americans in the political process. A recent study by the Institute showed most Arab-American Muslims identify as Democrats, and favor Clinton over Trump and third-party candidates. But that doesn’t always translate to widespread support for Clinton within the Muslim-American community.

At a debate watch party hosted by the institute, the crowd focused on the Democratic nominee’s comments about national security. As Clinton spoke about working with “American Muslim communities who are on the front lines to identify and prevent attacks,” a woman groaned and rolled her eyes. It’s not an uncommon reaction. Many Muslims say that by singling them out when it comes to national security, Clinton is placing an unfair burden on the community, and it’s the job of all Americans — not just Muslims — to be vigilant.

“We’re definitely hearing from on the ground that people are frustrated with the messaging and the framing of the Clinton campaign and the way she talks about the American Muslim community,” says Hoda Hawa, policy and advocacy director at the Muslim Public Affairs Council.

Despite that, Hawa says she’s hearing more support for Clinton within the Muslim American community, because, well, she’s not Donald Trump.

“I think it’s more of a vote against a candidate, rather than for a person that they’re really, truly excited about.— Hoda Hawa, policy and advocacy director at the Muslim Public Affairs Council

“I think it’s more of a vote against a candidate, rather than for a person that they’re really, truly excited about,” Hawa says.

On the last day Virginians could register to vote, Othman Kefi walked around the Dar Al-Hijrah mosque with a clipboard in hand. He’s registering voters just before Friday prayers, and roughly 20 people signed up by mid-day. Kefi says that many people cite Trump’s comments as the reason why they’re voting.

“This sort of stimulated many Muslims to register to vote so they can also express their disdain for targeting one religion,” Kefi says.

On the women’s side of the mosque, Nejat Abdurahman is getting ready to leave after Friday prayer. The Ethiopian-native is voting for the first time on November 8th. She became an American citizen in July, and registered to vote on the same day.

“This is really crucial, you know?” Abdurahman says. “The candidate that we have that may be elected could be the worst that could happen to America.”

Though Abdurahman is looking forward to voting in her first American election, she says she’s still not too enthused about her pick for president: “To be honest with you, I’m not too excited but I’m voting for Hillary because that’s the better option.”

Abdurahman says that as a Muslim-American, she believes her vote matters more than ever in this election. Despite some of the reservations people have about the candidates, it’s a sentiment that many Muslim-American leaders hope other Muslims will take to the polls on Nov. 8.