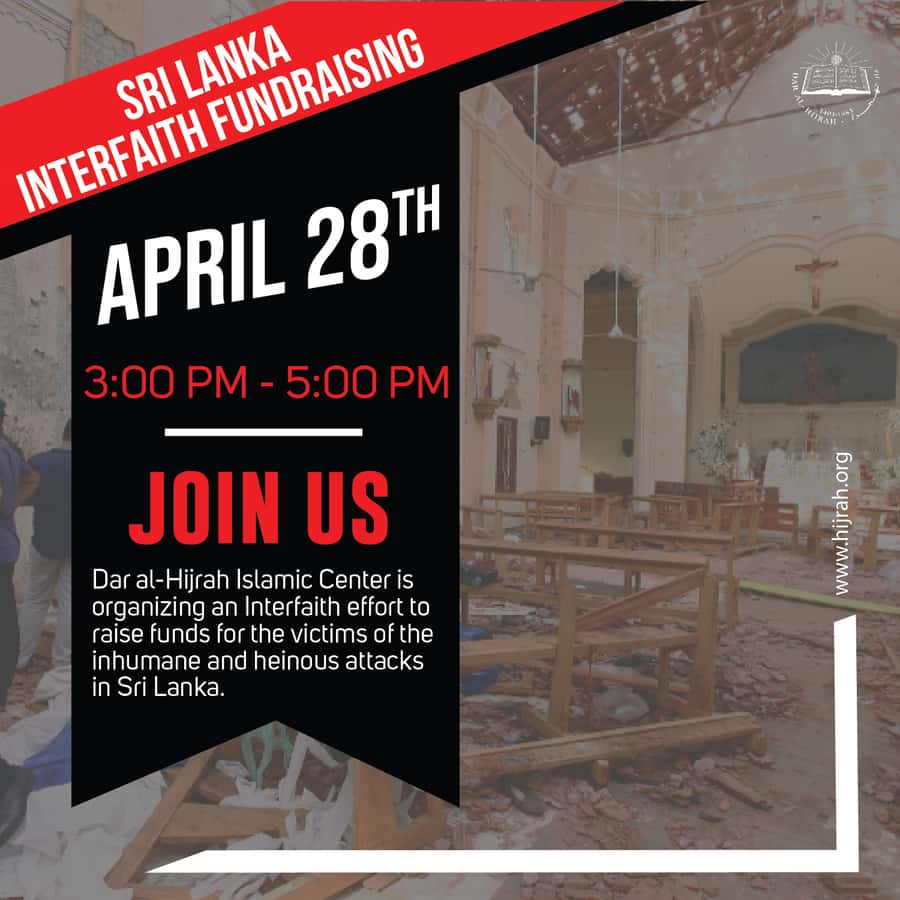 Join us as we stand in solidarity and raise funds for the people of Sri Lanka at DAH from 3-5PM!

Falls Church, VA, April 22, 2019 – (Quran 40:3) [They are] those who have been evicted from their homes without right – only because they say, “Our Lord is God.” And were it not that God checks the people, some by means of others, there would have been demolished monasteries, churches, synagogues, and mosques in which the name of God is oft mentioned…)

Dar Al-Hijrah Islamic Center condemns the despicable, horrific and inhumane attacks on the Churches and tourist places in Sri Lanka on Easter Sunday. On a day intended for the remembrance of the divine people are grieving and have lost a sense of security. According to the latest media reports 290 innocent worshippers and other civilians lost their lives and several hundred were wounded by these terrorist attacks.

Dar Al-Hijrah Islamic Center stands in support and solidarity with our fellow Christian brethren. These attacks do not represent Islam and Muslims, no person with even an atom’s worth of Islamic Faith or understanding can commit such a heinous attack on people.

We send our heartfelt condolences to our Christian brothers and Sisters at the loss of innocent lives in Sri Lanka. We pray for the speedy recovery of the injured and wounded.

Verily to Allah we belong and to Him we all return.

About Dar Al-Hijrah Islamic Center: Established in 1983, Dar Al-Hijrah is a masjid and Islamic Center serving the Northern Virginia Muslim community. The center holds 5 daily prayers, hosts more than 3000 congregants during Friday prayers, and serves the local community through a weekly food bank and other social service functions.